Nielsen has released its report on The Mobile Consumer and the insights that matter most to automotive marketers are as follows:

A glimpse into mobile behavior patterns has been provided by comScore’s Mobile Future in Focus Report 2013, which shows how consumers engage different devices during the day: 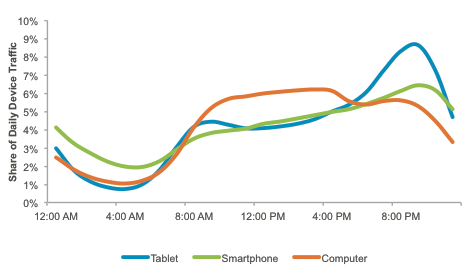 As the comScore report shows, we are all becoming “digital omnivores,” accessing content through different devices at different times of the day.

The successful delivery of automotive marketing content to mobile devices – smart phones and tablets – is directly impacted by the optimization of your website, landing pages and e-newsletters for mobile.  It is no longer a question of if you should do it, it’s now just a question of when.

comScore says that with smart phone penetration now past 50%, the market has now entered the “late majority” stage of the technology adoption bell curve:

This means that the media consumption habits of consumers is now substantially different than it was just a year ago, and that new media strategies are required to capture this audience that now numbers more than 80 million American consumers.